Let’s observe a child together. 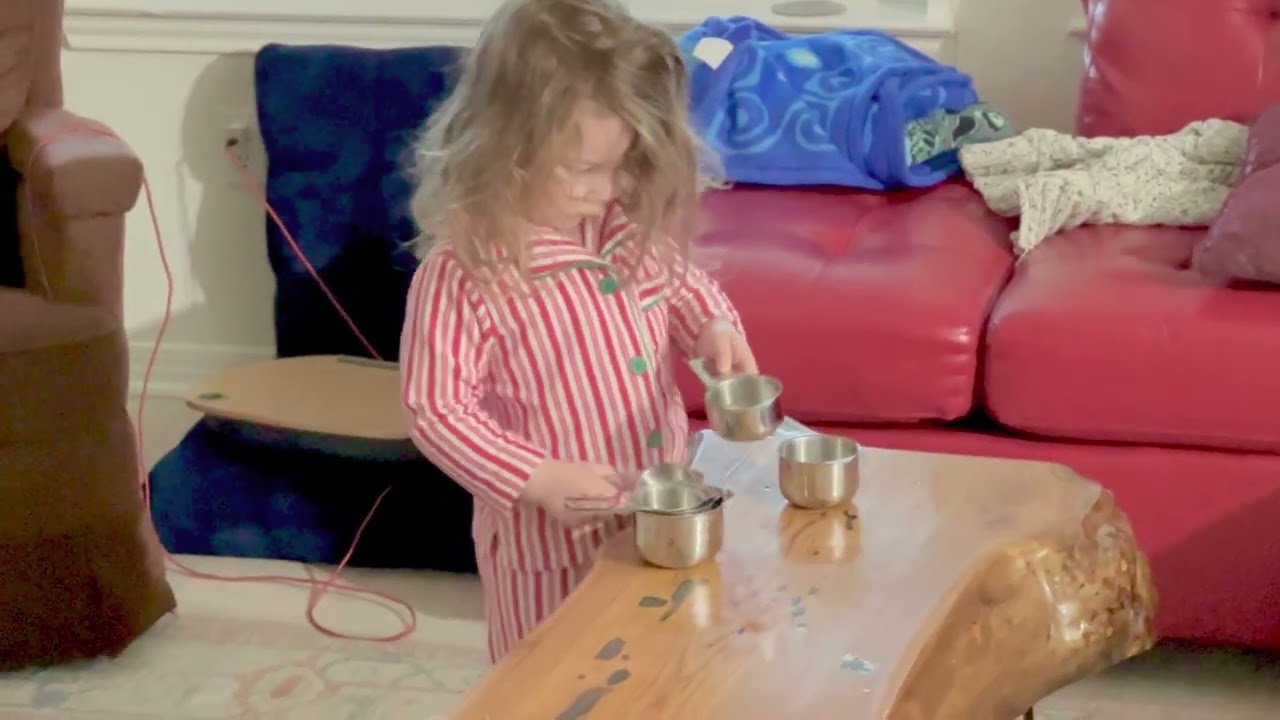 This is Alice, my daughter. She’s 2y8m. She just woke up from a good night’s sleep. (And yes, in our house, Christmas season starts the day after Halloween, so she’s wearing her Christmas pajamas.) She has found some metal measuring cups stacked on the coffee table. About five minutes before I started recording, she disassembled the stack and separated them, and she’s been trying to reassemble them since.

Let’s watch the last three minutes of her work. What do you notice?

There are many noteworthy things here, but what jumped out at me was the phenomenon that Montessori called “control of error”. Montessori thought that it was critical to make the child’s mistakes perceptibly obvious to her.

Montessori wanted to help children develop powerful virtues; she wanted her classrooms to be places of “prudence, certitude, and experience; a sure viaticum [provision] for the journey through life.” But,

[t]o give this sense of security is not so simple as one might think; nor is it easy to set children upon a pathway toward perfection. To tell a person he is clever or clumsy, bright, stupid, good or bad is a form of betrayal. The child must see for himself what he can do, and it is important to give him not only the means of education but also to supply him with indicators which tell him his mistakes.

In learning anything, it is inevitable that one will make mistakes. But, as much as possible, Montessori tried to minimize the adult’s role in identifying and correcting the child’s mistakes. The normal role of the teacher is to make observations and offer corrections. (Think of a worksheet full of red marks, or a teacher hovering over a child and trying to “helpfully” micromanage her and accelerate her learning as she does some complex task that she is getting wrong.)

The better approach, she thought, is to put the child in a position where she can correct herself. If she can immediately notice her mistakes on her own, she won’t shy away from them or become defensive or embarrassed or discouraged. She will find joy in solving for the mistake, in correcting herself.

The passage (from The Absorbent Mind, ch. 24) continues:

Let us watch a somewhat older child who has been educated in this way. He works out sums in arithmetic, but is always shown how to check the answer, and this he forms a habit of doing. The checking often attracts him even more than the sum! The same thing happens in reading. In one exercise the child puts cards with names on them against corresponding objects. As a check, there is a card kept apart on which the same objects are pictured with their names written beneath them. The child’s greatest pleasure is to use this to see if he has made any mistakes.

If in the daily routine of school we always arrange for errors to become perceptible, this is to place us on a path to perfection. The child’s interest in doing better, and his own constant checking and testing, are so important to him that his progress is assured. His very nature tends toward exactitude and the ways of obtaining it appeal to him.

The principle applies beyond literacy and math, to sensorial materials and to practical life. A toddler arranging flowers notices when he has done something in the wrong order—because the task is set up so that it’s impossible to continue unless the correct order is followed! Many sensorial manipulatives are self-contained exercises in self-sufficient trial and error correction.

And here we see the principle at work in these random measuring cups I left laying out. They are graded by size and fit together perfectly. They are also, like Montessori materials, sensorially enticing: they are metal, heavy, real. For no practical reason whatsoever—but for deep developmental reasons—Alice was drawn to sorting them.

The gradations of the cups work analogously to the gradations in other sensorial materials such as the cylinder blocks or the pink tower: one cannot complete the task unless one sorts them perfectly, and it is obvious at the sensorimotor level when the task has not been completed. There’s a measuring cup (or a cylinder block) left over, or there’s something that doesn’t fit right (or the tower is unstable).

If I were correcting Alice, her reaction would typically be to get angry at me or to stop doing the task entirely. But if she can correct herself, her typical reaction is to completely surrender to her errors. It’s to work diligently, over and over again, without any fear or pain or anxiety, to correct them. (She gets this sort of experience every day in her Guidepost Children’s House classroom, which no doubt makes her more likely to do it here at home.)

Practicing controlling one’s own errors is valuable in and of itself. In modern parlance, it builds friendliness with failure and a growth mindset. And it’s also a necessary component of independent concentration on complex tasks—which builds a secure relationship between the self and the world. It builds that “prudence, certitude, and experience” which are “a sure viaticum for the journey through life”, a compass to navigate “a pathway toward perfection”.

Dr. Matt Bateman earned his Ph.D. in Philosophy in 2012 from the University of Pennsylvania. He taught and continued his research at Franklin and Marshall College in the Department of Psychology, on topics ranging from neuroscience to evolutionary theory to philosophy, before joining the LePort Schools as Director of Curriculum and Pedagogy in 2014. In 2016, Dr. Matt Bateman became a founding member of Higher Ground Education. He is now Vice President of Pedagogy for Higher Ground and the Executive Director of Montessorium.